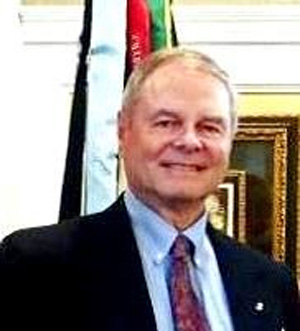 Raised in Fairfax County in Northern Virginia. Active as a Cub Scout and Boy Scout from a young age eventually achieving the rank of Eagle Scout. He was graduated from Virginia Tech in 1976, where he was a member of the Virginia Tech Corps of Cadets.  Initially commissioned in the Army as a 2nd Lieutenant, Field Artillery, he later attended flight school and became an Army Aviator.  Leaving active duty as a Captain in 1987, he became an Army Civilian and Aviation Requirements integrator at the Headquarters, U.S. Army Training and Doctrine Command.  He retired in 2012 as a Senior Army Logistics Management Specialist.  After leaving active duty he also joined the Virginia Army National Guard flying for a number of years before transferring back to Field Artillery.  He retired from the Virginia Army National Guard in 2012 as a Chief Warrant Officer Four after 34 years of military service.